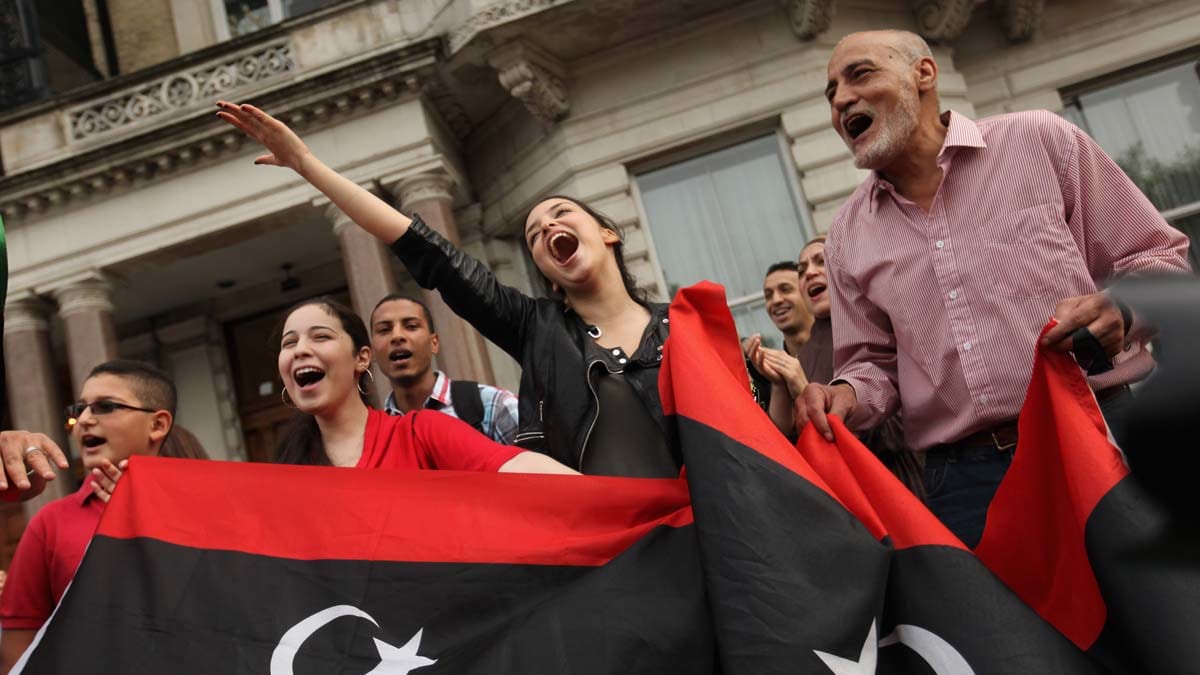 We [the NTC] request from the international community to fulfil its obligations to protect the Libyan people from any further genocide and crimes against humanity without any direct military intervention on Libya soil.

On 1 September 1969, exactly 42 years ago, the Libyan ‘revolution’ was launched by a coup d’état against King Idris under the leadership of a young military officer, Muammer Gaddafi. Nobody could predict that Gaddafi would stay in power as a ‘secular’ dictator until a true Libyan revolution. On 1 September 2011, the hunt for Gaddafi is on, despite his offer to discuss a ‘transition of power’ and there is a £1 million reward for his capture ‘dead or alive’. How did Libya reach this point in history? Under Gaddafi’s dictatorship, a ‘people’s revolution’ was declared and the official name of the state was changed from the ‘Libyan Arab Republic’ to the ‘Great Socialist People’s Libyan Arab al-Jamahiriyah’ in 1977.

However, the Libyan state was neither great nor socialist. During four decades, there were very strong signs of the regime’s failure under the ‘whimsical leadership around Gaddafi’: no constitutional system, no human rights, no opposition, no civil society, no free media but arbitrary arrest, disappearance, detention, and torture. Moreover, it is clear that despite all the rhetoric about ‘revolution’ and the ‘state of the masses’ Gaddafi has abused the oil wealth for personal and family interests. He created a ‘rentier’ state, of which oil revenues were exploited by the regime to serve his family, loyalists and international powers’ vested interests.

In the international arena, Gaddafi’s secular outlook and his hatred of Islamic fundamentalists brought him into alliance with the West. It was back in the 1970s that Gaddafi did not hesitate to hang the members of Hizb-ut Tahrir and it would not be too difficult for him to rhetorically support the Bush-Blair war against Al-Qaeda in 2000. After 9/11, the international community speculated about political changes in Libya when the Gaddafi regime rhetorically condemned the use of state terrorism and agreed to abandon its effort to develop weapons of mass destruction in December 2003. While Gaddafi seemed to be altering the foreign and security policies of Libya, he hardly introduced significant political reforms domestically, especially not for the progress of human rights, good governance and the freedom of the people. The continuing annual reports of Amnesty International and Human Rights Watch highlighted the systemic abuse of human rights whereby Libyans ‘who oppose the ideology of the Gaddafi revolution may, under Law 71, be arrested and even executed’. It is no surprise that the Libyan people rose up for their freedom under the influence of the Arab Spring. Gaddafi foolishly portrayed himself as a ‘martyr’, a victim of Western colonialism and stated that he would fight for his cause until the end.

One might wonder why it took four decades to rebel against Gaddafi’s brutal rule but there is no doubt that they are not a bunch of ‘rebels’ without a cause. After toppling the regime, anti-Gaddafi forces established the National Transitional Council of Libya (NTC) – also referred to as the Transitional National Council – and issued a statement on 5 March 2011, in which it declared itself as the legitimate authority of Libya. Their aim has been to ‘liberate Libya from the hands of the tyrant’ and then their challenging task is to rebuild a new Libya based on national and international legitimacy.

To gain national legitimacy, the protection of state-hood and nationhood through the establishment of the Libyan National Assembly is crucial. Despite historically-rooted tribal divisions and tensions, the national unity of Libya is vital for the future of the country. The NTC has stressed that the new Libya will be pluralist and multicultural, and it will guide the country to free elections and the establishment of a constitution for Libya‘ [11]. Moreover, a new government must be inclusive and based on democratic principles that allow all minorities and political groups to participate, including former government officials and other people who served Gaddafi and his family in the past, so long as they were not involved in illegal activities. A new Parliament should be elected through a fair process that includes everyone who wants to run‘ [12]. Therefore, every effort must be made to avoid driving former Gaddafi supporters into violent opposition but not to hesitate to bring secret police and others with innocent blood on their hands to justice. Of course, this is easier said than done. ‗Reconciliation, as the Council has called for, is a highly desirable aim, but not all the militias agree and revenge killings have already taken place in the Jabal, sometimes on a tribal basis. [13]‘ In order to establish security and maintain stability on a national basis, current state institutions, in particular the army and the police, must be retained. It is important to note that, aside from the most hated compounds of Gaddafi and his family members, there has been little looting of national treasures.
With regard to international legitimacy, the role of NATO airstrikes in support of the rebels was significant in shifting the power balance against Gaddafi and his loyalists. It seems that the international community drew lessons from past mistakes in Afghanis-tan and Iraq. This time, the Libyan intervention was authorized by the UN Security Council and legitimised by international law. However, the legacy of the US-led invasion of Iraq and subsequent occupation is still with us. It raises the questions, what kind of new Libya will emerge and what can be done to prevent the threat of the Iraqization‘ of Libya in the near future [14]. In order to strengthen international legitimacy, the possibilities of deploying any kind of international military force and/or peacekeepers on the ground – the UN or others – should be avoided in Libya [15]. These possibilities have already been rejected by the Libya‘s interim government [16]. The existence of international ground forces can easily trigger anti-Western and anti-American feelings, as experienced in Afghanistan and Iraq, which will harm the legitimacy of international support for the Libyan people. The encouraging development for continuing international support is that the NTC is widely recognised as the legitimate representatives of the Libyan people by over 70 countries. On 27 August, the Arab League became the latest international organisation to recognise the NTC, which also confirms its regional legitimacy in the Arab World [17].
So far, so good: the Libyan Revolution carried the fading Arab spring into an important historical juncture for the future of the Middle East and North Africa. However, there are three major dilemmas that the NTC and international community will face at the outset. One is that the international community will insist that democracy‘ is the only game in town in order to prevent the rise of any Islamist group, especially the Libyan Islamic Fighting Group (LIFG). The second dilemma is that democratisation will require economic growth and stability. As a rentier state, the Libyan economy relies overwhelmingly on oil and gas revenues. While oil prices rocketed after the US-led invasion of Iraq and the subsequent international economic crisis, Libya‘s oil and gas resources had not been exploited as heavily as other Arab oil producers, due to the years of UN sanctions. The third dilemma, therefore, will present itself as prioritising the production and distribution of oil to international markets over other issues, such as solving the urgent national problems of paying salaries of state officials, supplying water, energy and sanitation. While the new Libyan leaders are busy freeing themselves from the shadow of Gaddafi, international leaders must help them by avoiding the above-mentioned dilemmas, namely premature democratisation, the push for economic growth, and the rush for oil.
In relation to the first dilemma, i.e. the promotion of premature democratisation, the experience of Afghanistan and Iraq prove that democratization is not an easy task and it is not about having regular elections and a functioning parliament in the short run. Democratisation is a complex and long process with ups and down along the way. For the second one, the push for economic growth cannot be sustained by oil exports alone and, hence, economic diversification must be encouraged by international companies. For the third dilemma, the rush for oil, the production and distribution of oil resources must be used for the national cause and economy without allocating privileges to any group or community. Hence, Libya should not be pushed into premature elections by the international community in particular, US and EU – but must be given time and resources to organise and mature its multiparty system, civil society and public opinion. This will actively strengthen the economic, political and social fabric of the new Libya. Pushing for elections too soon can give too much credence and undue power to marginilised tribal factions and Islamic militant groups, especially LIFG, which is the only likely group to be able to garner loyalty in the immature Libyan political landscape. [18]‘

There are hopeful signs that the TNC can sustain Libyan unity and commit itself to the building of a democratic constitutional order and an equitable economy step by step. It will not be easy, because Libya has no constitutional experience with citizen participation, an independent judiciary, or the rule of law. [19]‘ Once all the conditions are met to establish the Libyan National Assembly and a constitutional order, the promotion of democracy and economic growth is likely to contribute towards freedom, national unity and the social peace that the Libyan people demanded. Based on national and international legitimacy, the Libyan Revolution has been achieved by the Libyan people and the political landscape of their country can only be cultivated by them too. It is not easy but it is neither too little, nor too late. PR
Notes:
* Director, Centre for the Study of Radicalisation and Contemporary Political Violence (CSRV); Lecturer in International Politics of the Middle East and Islamic Studies; Department of International Politics; Aberystwyth University.
1) Founding Statement of the Interim Transitional National Council, http://www.ntclibya.org/english/founding-statement-of-the-interim-transitional-national-council/
2) £1m for Gaddafi ―dead or alive‖,‘ The Independent, 24 August 2011, http://www.independent.co.uk/news/world/africa/1m-for-gaddafi-dead-or-alive-2343032.html
3) Timeline: Libya,‘ BBC News, http://news.bbc.co.uk/1/hi/world/africa/1398437.stm
4) Fred Halliday, ‗Libya‘s regime at 40: a state of kleptocracy,‘ Open Democracy, 7 March 2011, http://www.opendemocracy.net/article/libya-s-regime-at-40-a-state-of-kleptocracy
5) Mark Almond, ‗More make-up (and hair dye) than his 40 virgin bodyguards, but Libyan leader Gaddafi is still a murderous menace,‘ Daily Mail, 12 June 2009, http://www.dailymail.co.uk/debate/article-1192494/More-make-hair-dye-40-virgin-bodyguards-Gaddafi-murderous-menace.html#