Freedom to choose is the basis for current democratic systems and here exists two uncertainties: 1) whose freedom? And 2) whose choice? If it were my freedom and my choice, I would return the current capitalist, democratic society into a state of anarchy, in the true definition of the ideal. Anarchy was hijacked by democracy to infer a state of disorder due to the absence or non-recognition of authority and power. True, anarchy may not confer authority and power, but it does not promote disorder. In an anarchistic state, the disorder would come from the democrats, whom the anarchists would whole-heartedly welcome into their society. Anarchistic ideals pose a significant threat to democracy and capitalism if they ever gained momentum because power in anarchy is shared amongst the people. It is not surprising that democrats suppressed it through propaganda. The most pace anarchy ever gained was within high-strung punk rock songs, where the artists were trying to inform listeners that superpowers held their world on puppet strings.
Our social edifice is set to feedback into itself through a series of ‘can do’ and ‘can’t do’ processes that contradict their aims and perpetuate their need. The legislation that governs or constrains society is all written in a schizophrenic fashion within and between tiers of government. The feds want one thing whilst the states want the opposite, and local governments react, distribute and enact the avalanche of motions. Each government represents different communities and different lifestyles and work for their common good, and sometimes those of their neighbours. They keep the rich people rich, the bad people confined and the good people in an often-monotonous daily ritual whilst the rest look for a nice patch of dirt under the bridge.
That is the degrading depressing delusion of democracy. Whilst searching my thesaurus for definitions and words to grasp the concept, I found terms like equality, egalitarianism, classlessness and fairness ring hollow. There are enormous divisions of class in democracy. Whilst politicians increase their salaries, some of their very citizens are living and dying on the streets.

Everyone is talking about environmental climate change but they seem to be missing the holistic picture. As resources become scarce, chaos will draw nearer and be assisted by floods, fires, segregated social systems, looting, warfare, plagues and unavailability of primary and secondary resources.

In a similar search for synonyms of anarchy, disorder, chaos, lawlessness, mayhem, mobocracy and ochlocracy also were not consistent with the ideology. When I think of anarchy, I find myself muttering words like environmentally sustainable Buddhist nirvana, and all of the synonyms currently used for democracy. And there lies my hypocrisy whilst I wear shoes and cook with a glass of red over a gas burner. Perhaps democracy is the best system for governance after all.
Meanwhile the democratic society outside is about to implode. Another earthquake. Another wildfire. Another bomb exploding in the name of a Godly desire. Consistent warfare without warrant is clearly having its toll on people. The life of the bombed is worthless, and yours too because people died to bring you your fuel. There is no escape. The iGeneration know this and it is obvious in their demeanour. Are we all only lemmings working in a production line?
What I really want to know is if the political, economic or natural climate will change first? Everyone is talking about environmental climate change but they seem to be missing the holistic picture. As resources become scarce, chaos will draw nearer and be assisted by floods, fires, segregated social systems, looting, warfare, plagues and unavailability of primary and secondary resources. Is our past our future? The Oscar Award-winning repeats from Hollywood indicate that the replay button has already been pressed.
Aspects of life on earth also are hard to comprehend. Like the part where we spend millions on the idea we will all move to Mars once we destroy Earth. In reality we would probably be lucky to get seven people to Mars, let alone 100. I am still confused as to how Noah could house one male and one female of every species during a proverbial 40-day flood on his ark, when scientists are still discovering new species today!
One day, however, we may need to migrate beyond our beginnings. Away from the perfect world God created in seven days, to another that she didn’t quite perfect. How will we survive on Mars anyway? We know there are no resources so we will have to take them with us, if we have any left. Besides, I thought the point of emigration was for a ‘better’ life?
Emigration occurs for three basic reasons. One – the emigrants are not accepted by their society. Two – the emigrants are not accepting of their society. And three – the emigrants do not have enough resources to survive in their society. This happens frequently in wild-living populations of animals, usually because they live shorter lives and are wholly constrained by resource availability. Unfortunately for wild animals, grass for prey does not always come packed for convenience and prey of predators can still run away.

Effects of emigration are tied to the three areas that the climate is changing. The political climate and the economic climate are the superficial margins most relevant to reasons one and two above. Where religious oppression, greed and poverty intertwine to form a democracy. The natural climate is related to the third reason yet it is the most important because it forms the basis of politics and economics. Leaders need to lead through both times of need and times of greed, rather than being dragged by false promises used to gain votes. Actions speak louder than words.
The economic climate is driven by Gross Domestic Product (GDP) figures that form political agendas. If GDP figures are high then the support for the government are too. If Net Domestic Product (NDP) figures were used instead of GDP, humans may have a more enlightened perspective of our impacts on Earth and no government would ever be voted into power again! Low NDP figures would likely cause global economies to crash due to amplified inflation. Perhaps the word ‘product’ should be exchanged with the word ‘power’ … The terms ‘Gross Domestic Power’ and ‘Net Domestic Power’ alter the concept of economy completely yet are more representative of economic ideologies.
The disposition of power is a totally different ballgame yet again. Most people live within a democracy where their voices are kind of heard. When it comes to the crunch of daily rituals, people are employed by organisations run by autonomous bureaucrats, governed by often-contradictory policies. Professor Clark from Yale University wrote extensively about the ‘Bureaucratic Management Orthodoxy’ in Averting Extinction: Reconstructing Endangered Species Recovery. In a nutshell, it is an inflexible, inefficient, uncreative, and unresponsive system that stifles the spontaneity, freedom and self-realization of their employees. The bureaucrats enjoy autonomy because they know best, and it is easier to tell their staff what to do rather than ask them to vote on the options.
Decision-making processes are instantly compromised when the power is provided to the autocrats. Employees are kept in a cone of silence and forced to accept ends of which they do not approve. Clark suggested that although employees may be well-meaning and technically competent, high order managers require ‘hard-ball political skills because the lifestyles of staff are at stake. Luckily for those making decisions, democracy provides a protective shield of loopholes to escape responsibilities with a pay out scheme.
The problem is that staff enacting decision are closer to the local issues, whilst the power brokers are closer to the regional or national issues. That does not mean it is fair to ask employees to perform tasks that are: a) against their principles/morals/ethics; b) inconsistent with relevant legislation; or c) in conflict with other areas for management. According to the decision makers, however, the job has to be done.
What becomes of democracy in this instance? It has subverted back to a dictatorship. Employees feel helpless because their protests commonly fall on deaf ears. Bureaucrats meanwhile resist democratic control because in their position they are insulated from democratic life. Can we humans decide democratically how to manage the environment? Well, we kind of have, but the bureaucratic processes to protect it supersede the physical protection processes. Should we vote for the person that wants to save the environment for our future? Or the person that wants to use the environment for short-term economic gain? The answer lies in your hands.
Kevin Rudd, Australia’s previous Prime Minister, was dislodged from his position due to the proposed introduction of a new tax for mining companies. In the media it was misconstrued as a threat to the Australian economy. In hindsight, it was beneficial for Australians because the excess money was to be returned to the population, rather than landing in the pockets of the mining magnates. Perhaps the democrats did not sell the idea to the public properly. Or maybe the bureaucrats sold it perfectly according to their plans. We will probably never know.
If we lived in an anarchistic state, however, none of this would matter. Theoretically, there would not be a fight for power or status. There would be a harmonious and peaceful existence between man and Earth. I think that’s not only what humans want, it is what we need. PR
Note:
* Dr Brad Purcell is a Wildlife Ecologist with the Western University of Sydney. He is best known for his doctoral research on dingoes in the Greater Blue Mountains World Heritage Area, NSW. 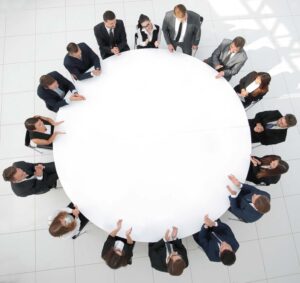