Abstract: A full, liberal democracy is a system that has fair, competitive elections along with conditions such as: nearly universal suffrage, a loyal opposition, and respected civil liberties. Democratic practices give countries an advantage towards economic growth and prosperity. In a study that analyzed economic growth from each year between 1960 and 2001, Halperin, Siegle, and Weinstein concluded that “citizens of democracies live longer, healthier lives on average, than those in autocracies. (Handleman, 2011 p 49)” Being a liberal democracy, it is generally believed, will naturally put a country in a better position to become developed.

The United Nations Development Programme (UNDP) uses the Human Development Index to measure levels of development around the world. This index is a “way of measuring development by combining indicators of life expectancy, educational attainment and income into a composite human development index. (UNDP, 2011)” In 2011, Pakistan was ranked at number 145 on this list, as a country with low human development and an HDI of 0.504. Due to its inability to fulfill all of the requirements of a liberal democracy, Pakistan is not considered a full democracy, and therefore has not been able to reap all of the benefits that other democracies have. In 2011, the United Nations Development Programme (UNDP) reported Pakistan’s gross national income per capita as merely $2,550. To put that into perspective, the gross national income per capita in the United States, which is a full, liberal democracy, is $43,017, almost seventeen times higher.

Certain aspects of Pakistan’s society reveal why it has not been able to transition to a developing country, despite its efforts towards democratization. First, it is useful to look at Pakistan’s historical development to understand how it became the country that it is today and to show why it is only a semi-democracy. Pakistan was drawn up as a Muslim nation by Muslims, who were not politically organized. It is a country that was founded on the “belief that political power was essential to the higher ends of establishing God’s law. (Mukherjee, 2010 p 69)” In 1947 Pakistan gained its independence from India at the end of British colonial rule. As a typical result of decolonization, “none of Pakistan’s regimes has been able to fully consolidate power. (Hoffman, 2010 p 79)” After gaining independence from Britain, India, especially with the help of Jawaharlal Nehru, was open to democracy. In Pakistan, on the other hand, “those who came to rule were not particularly open to democracy; they believed in personal cults and group interests, not in political institutions or systems. (Haqqani, 2006 p 222)”
In a full democracy, it is necessary to have elections that are “largely free of fraud and outside manipulation. (Handleman, 2011 p 31)” In Pakistan’s 1954 elections, however, that was not the case. “The sanctity of the ballot box was sacrificed for the sake of political interests and coming to power by any means. (Haqqani, 2006 p 223)” The Jagtu United Front won the elections but had not been trained in democratic traditions and was not successful. In 1958, Pakistan faced martial law for the first time. The military ruler Ayub Khan came to power, but was forced to abdicate his position in 1968. After his departure, however, democratic practices still did not ensue. He was succeeded by another military leader, General Yahya Khan, who presided over the separation of East Pakistan. In 1971, Zulfiqar Ali Bhutto was elected Prime Minister, but then declared himself the “Civilian Chief Martial Law Administrator. (Haqqani, 2006 p 225)” He drew up a new constitution for Pakistan in 1973, but he did not always follow what his own constitution said. He “not only persecuted his political opponents but refused to tolerate dissent, even from within party ranks. (Haqqani, 2006 p 225)” Therefore, at this point, liberal, democratic practices were still not in place in Pakistan. 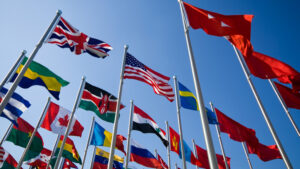 Next post Turkey and Peacebuilding in Africa: Leadership, Youth and Conflict Transformation